Based on my conversations with friends lately and my own pathetic dating life, I decided to comprise a list of 25 reasons why the dating world has gone to sh*t. Granted, most of these are from my own experiences, so they are from a woman’s perspective –

They’re also my opinion, so I wouldn’t recommend taking anything personal. Unless it applies to you, in which case, you should take it COMPLETELY personal.

……until they catch feelings

3. All of a sudden, 80% of guys are home-bodies who “don’t really go out much” and would rather you “come over and watch a movie”

4. You have to make them your #MCM/#WCW so they know it’s real -Submitted by Beatrice

5. Online dating has become a cesspool where 70% of people are either socially awkward, sexually frustrated or just really fucking unattractive.

7. The people that think they “aren’t ready for anything serious” are the same ones telling you they love you after a month and how “this never happens to me”

8. People have unrealistic expectations  but justify it as “not settling”

11. Every woman is “independent” and “doesn’t need a man”

12. “Age ain’t nothin’ but a number” until it’s time for a 20 year old to have a conversation with a 40 year old about their goals in life

13. Guys want a woman that cooks, cleans and does his laundry without question but when it comes time to pay for a date, will scream “equality”, “partnership”, “teamwork”

14. You do everything that couples do but won’t throw a title on it so you can always use “but we’re not together though” as an excuse to get a case of the “fuck-arounds”

15. No one wants to admit that they have no idea what they want

17.  Social media allows you to get to know multiple people at the same time which prevents you from truly getting to know one person because you have to remember what 8 other people’s favorite colors are and pretend to care about what they all like to do for fun

18. Instead of talking things out, you get subtweeted

19. Some single people can’t help but let everyone know they’re single. How many times have you seen this? 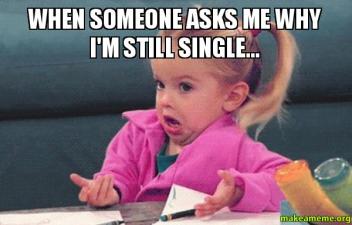 Them:”Hi. I think you’re beautiful and I would love to get to know you.”

You:”How is your day going?”

Them:”What do you want to know?”

22. A guy will ask you on a date, plan it, the whole nine. Then hit you with “Oh, by the way! Something happened to my car last week and i’m in the process of getting a new one” i.e. he doesn’t drive

24. Everyone lives super on edge with their feelings because no one wants to get screwed over

25. People try wayyy too hard to be someone they’re not while dating

That’s all I got! Feel free to comment and add on!

Round 3: What are your thoughts on internet dating?

-Submitted by a Panel Member

I’m not against internet dating but I personally have never met anyone who had an actual relationship that started online. Not saying they don’t exist but I’ve never met them. Lot of meeting people, networking or hook ups. Nothing like old fashion face to face

Internet dating is still very taboo and for NO real reason, because most of you have met someone on Facebook, Twitter, Instagram, etc. It’s the exact same thing as having a Plenty of Fish, Ok Cupid (Which, if you live in New York, you should be all too familiar with EVERYONE being on there), Black people meet, etc only those are designated for dating. “The Bachelor” and I met on Black Planet YEARS ago and we’re still really great friends. As for my opinion, I LOVE IT! It’s like a catalog of potential suitors. If I don’t respond to a message, it ends there. I can create a profile saying exactly what I want and have a bunch of guys message me that meet that criteria. It’s like online shopping – but for dating! Yeah, you have your crazies and you do have to be very careful because you never know who you’re going meet, but I take the good with the bad and it’s worked out well for me. A friend of mine actually married and had her first child with her long time boyfriend that she met on Myspace. I encourage everyone to be open-minded and optimistic.

I personally feel with the drastic change in how we communicate everyday as people with social media, internet dating has been more socially accepted across the board. Internet dating is not for me because I’m old fashioned. If you work 90 hours a week chasing your career and have a busy lifestyle sometimes old school dating can be very difficult to fix into your schedule. Internet dating allows you to tailor the type of individual you wanna meet “preferably someone who understands your lifestyle” and makes it easier to date on the fly. 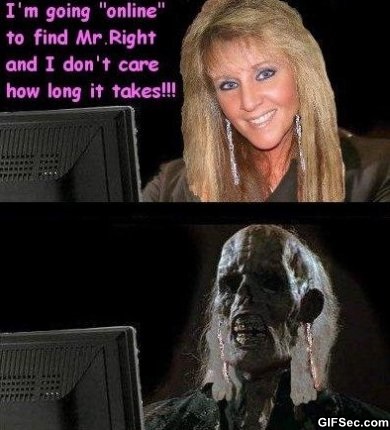 I have no issue with internet dating done well and with good intent. While I have yet to reach the desire to try it out, I can respect people who have used it to facilitate meeting new people or beginning a relationship. I hate to think society has become so enamored with the internet that we’ve taken to it to find our matches for us. It takes away from the whole social experience. But whatevs, I get it, life is chaotic and people want love without the hassle of having to physically put yourself in a place to find it. I understand too that some people are just exhausted of dating. These sites can cut the cost of time and energy wasted on total flops by simply clicking next or ignoring a message. However, from the people I know who’ve tried these sites, the number of creeps they encounter totally outweighs the number of winners. I mean there are people who abuse these programs and troll for prey. The internet is a scary place when considering you have no knowledge of who is on the other side of the screen. Deceit is possible through the internet and in real-time. I just feel like the internet can be so much more deceptive than me experiencing you first-hand and catching your vibes. I’m not against it, I’m just not necessarily pro-internet dating either. I guess you could consider me indifferent. I understand it’s purpose for some people, I just don’t know that I’d trust it for myself. If it’s your preferred avenue, no judgement bro.

Online dating is great… when done right! Social media has made the dating world especially easier than meeting someone in person. On both ends of the scale it can be a good or bad thing. If you’re not catfish !!! There is a science to making a profile that attracts the right person. I would advise if a person decides he or she wants to meet up that you tell a friend for safety reasons.

I THINK WITH SO MUCH OF OUR LIVES BEING DISPLAYED ON SOCIAL MEDIA FROM FACEBOOK TO INSTAGRAM AND ETC… IT’S A COOL WAY TO MEET PEOPLE. I’VE Met A Lotta Cool People online. The Real Question Should be What Are you looking for When You Online Date Are You Seeking A Soul Mate, A Friend, A One Night Stand  Or a fuck buddy.

To submit a question for The Panel, fill out the form below: